The cloud foundry firehose and syslog streams generate tons of metrics and logs. What should a busy devops engineer look at ? My colleague Ford Donald put this awesome list of the top 10 KPIs of Cloud Foundry.

A lot of developers do not realize that Cloud Foundry can run a process from any runtime including .NET. Windows applications are managed side-by-side with Linux applications. .NET apps get support for key PCF features like scaling including autoscaling, monitoring, and high availability, logs and metrics, notifications, services including user-provided services and PCF set environment variables. BOSH and OpsManager now supports deployments on Microsoft Azure via pre-built ARM templates.This blog post provides details of the Windows support and provides guidance on migrating .NET apps to Cloud Foundry . This post build extensively on the work done by the Pivotal product engineering and the solutions team particularly Kevin Hoffman, Chris Umbel , Zach Brown, Sam Cooper and Aaron Fortener.

There are two ways to run ASP.NET  apps on Cloud Foundry

• Garden-Linux containers are based on LXC (Linux cgroups)
• Developer OS is Win, Mac OSX and Linux 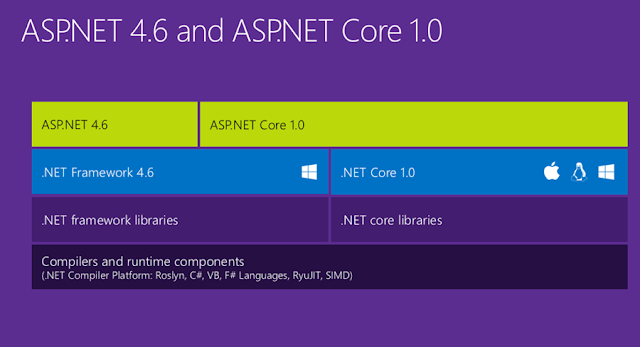 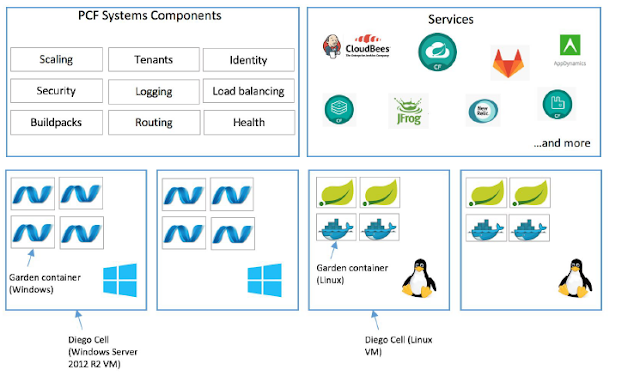 • For Greenfield Applications Try “Core First” approach
• For Replatforming and migrating Existing Apps Probably ASP.NET 4.x
• Dependencies and framework requirements will likely dictate choice
• All versions of the .NET SDK supported by Windows Server 2012 R2 are supported on PCF including 3.5, 4.5, 4.5.1 and 4.6 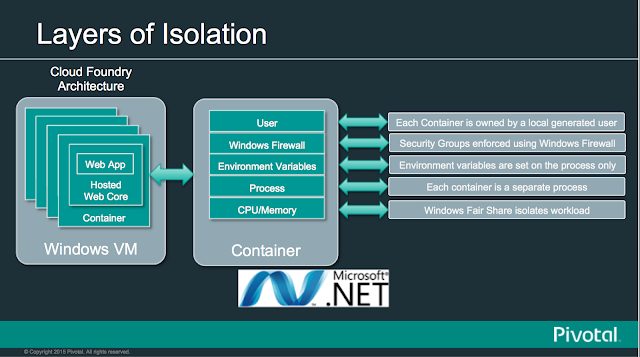 Non Cloud-Native stuff you will want to change

• Reading/Writing to the Registry.
•  Super old versions of ASP.NET. Upgrade to .NET core or ASP.NET 4.x
• Reading/Writing to the local disk. File systems are ephemeral. Replace usage of the file system e.g. disk logging even temp files with a S3 compatible blob store or external file store.
• Does the app use integrated Windows Authentication? Replace  Integrated Windows Auth. with ADFS/OAuth2 to leverage UAA and Pivotal SSO Tiles
• In-Process Session State / Sticky Sessions. Replace InProc, StateServer with out-of-process data store e.g. Redis, SQL Server
• Externalize  environment-specific config in web.config into VCAP environment variables. If value changes between environments, don’t get it from web.config. Don’t use externalization methods that only work in Azure. If app relies on machine.config or applicationHost.config, could have issues in PCF.
• For MSI-Installed services or drivers, Bin deploy dependencies with app.
• Nearly every app will need refactoring to use Console logging and tracing. Customers who mess with applicationHost.config can interfere with tracing, logging, etc.
• 32 bit ASP-Net builds/References/Builds/apps depending on 32-bit libraries will not work. Use of 32-bit dependencies or when the app is itself a 32-bit app this is a red flag.
• Does the app run as a service or a WCF Self-hosted services as opposed to IIS-hosted ? These services will need to be self-hosted in IIS as part of the replatforming to PCF.
• Apps requiring assemblies in Global Assembly Cache won't work in CF.
• Backing Service Drivers requiring native installers / DLLs may not work in CF.
• On Demand Apps and ones triggered by job controller will need to be refactored to run in CF to use CF one-off task support coming in the CC v3 API.
• MSMQ and tight integration with other MSFT server products via on-server dependencies will need to be refactored to use external backing services. .NET Core is now supported in the RabbitMQ .NET client.
• Routing to non-HTTP WCF endpoints and listeners for third party middleware will not work since only HTTP based inbound traffic is routed to the windows containers.
• Reliance on Microsoft-specific infrastructure? (e.g. MSMQ, BizTalk, SharePoint, etc). These apps do NOT make good candidates to port to PCF. 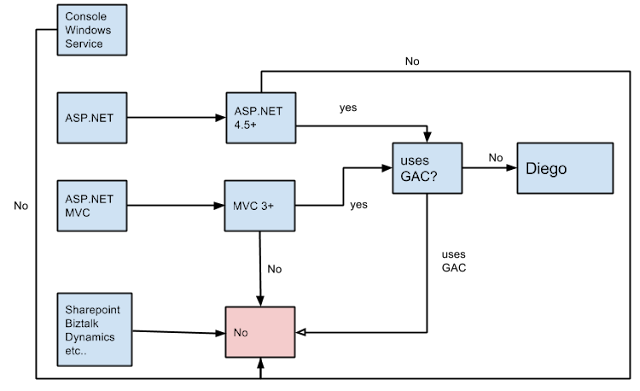 One of the key tenets of operational readiness is to be prepared for every emergency. The best way to  institutionalize this discipline is by repeatedly creating chaos in your own production deployment and monitor the system recovery. The list below is a listing a tools from the PCF Solutions team @ pivotal and others to cause chaos at all levels in the stack in Cloud Foundry.